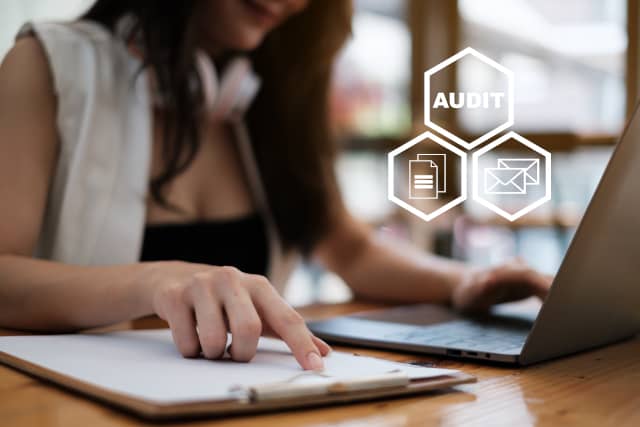 This is a continuation of our series of articles on maintaining food safety standards during a pandemic. You can read part 1 one of our series here.

Preparing for a Remote Audit

The image below shows quite a detailed diagram on preparing for your remote audit to meet the BRC Food Safety Standards. It’s a nine point checklist that BRCGS offered certificated sites just to give you a flavour of what BRC proposed and what you’ll actually read later is that the feedback and the lessons learned pretty much mirrored a lot of these points. 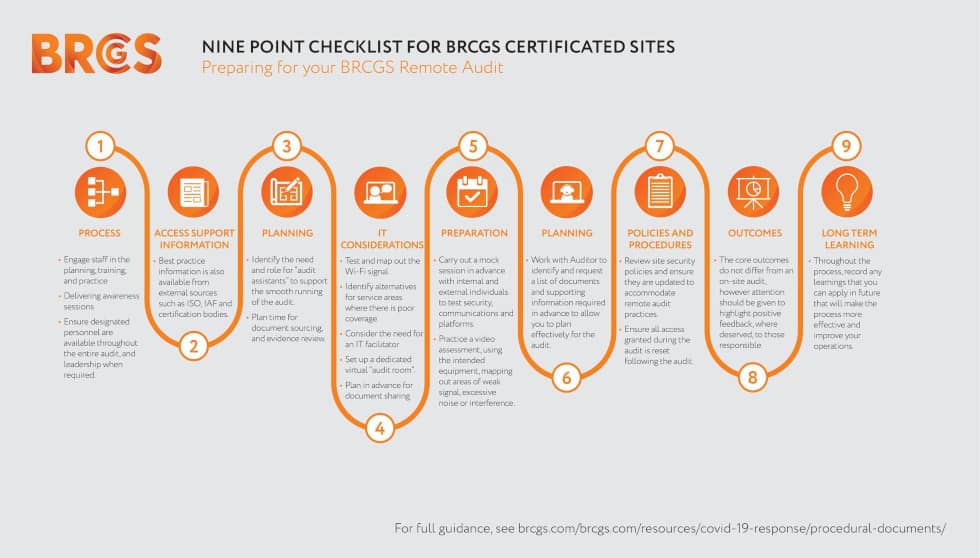 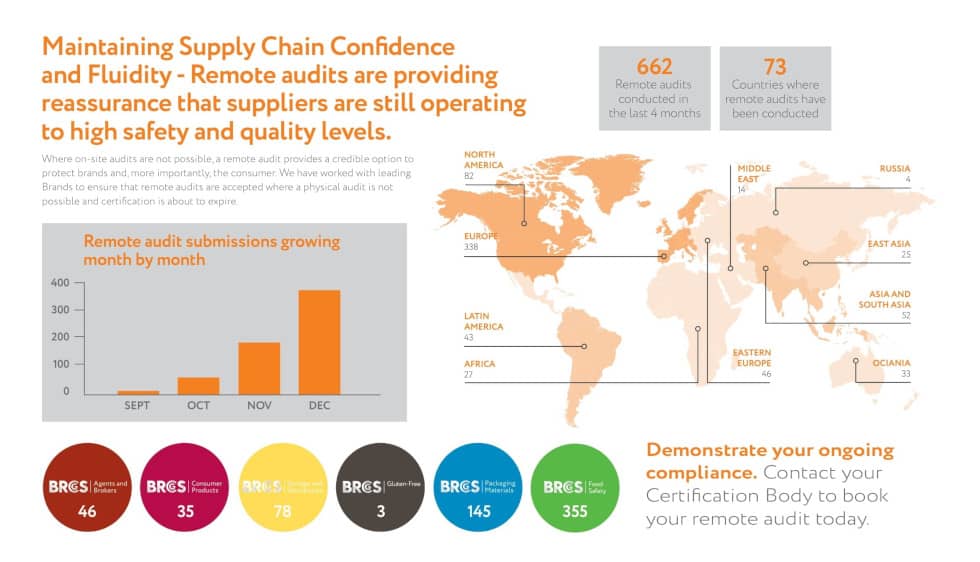 We know that approximately 20,000 food safety audits took place in the last 12 months and a small percentage were remote audits and blended audits.

We wanted to share a little bit of how that’s worked regarding maintaining supply chain confidence and fluidity. Remote audits are providing reassurance that suppliers are still operating to high safety and quality levels. This is based on the BRCGS remote audits done globally.

During the pandemic what we can see is that there was an increasing trend of remote audits taking place between September 2020 and December 2020 across the globe. In total there were 662 remote audits and they were conducted in 73 countries. Of these, 46 were remote agents and broker audits, 78 were storage and distribution audits, 145 were remote packaging material audits and 355 remote food safety audits.

We can also see it split up by country and about 50 percent of those audits were conducted in Europe, a total of 338 of them. This shows us that the sites, the certification bodies and auditors all got on board reasonably quickly with the new audit options available to them. Their confidence grew as they got used to this new way of working and we can see that reflected in the number of audits done from September right through to December.

In a typical year, approximately 20,000 or more food audits would be completed to the BRCGS food standard. We did see a slight drop off initially during the pandemic but that picked up as the year went on and by January 2021 the number of audits completed were actually more or less the same year-on-year.

We can assume that there have also been less visits overall to sites by specifiers and customers and the question is, has this led to complacency? We will explore this later on in the article.

There was much feedback from the auditors that conducted these remote audits. For them, it was actually quite a bit of a culture shock as well as the site owners as neither had much experience with these that led to a few issues. Many sites hadn’t thought about investing in much of the necessary equipment so there were complaints of poor quality headphones, poor wi-fi in some or all areas, poor lighting that made it very difficult for the auditor to see the standard of construction, and so on. It made a lot of auditors realize how much they rely on the sense usually while conducting an audit, observing the environment and listening to interactions between employees. These were all challenges to a remote audit.

Another issue was that some companies were nervous about releasing their documentation over email but measure such as non disclosure agreements were used to allay most of those fears.

So auditors were initially quite sceptical about how video observations of facilities would work out, given that auditors would lose most of their senses except sight when viewing remotely and the video presentation indeed does not replace a walkthrough of the facility. You do really need to be present on site to get the full experience of the culture of the company and its staff through its operational practices but video does afford some understanding of the process and the overall standard of construction and equipment.

It gives you a pretty good idea about the housekeeping and the hygiene and the general current operating standards.

Some specifiers did want their usual auditor to do the remote audit instead of a new one because they are already familiar with the site layout and they know where the blind spots are but then we also heard that new auditors were seeing new non-conformances because they were less familiar with the site. So by having a new auditor and also by having the documentation in advance this could actually allowed the auditor time to do a more in-depth risk assessment and therefore some sites saw an increase in documentation for non-conformances

We will continue to discuss further lessons that were learned during the pandemic in our 3rd part of this series of articles. 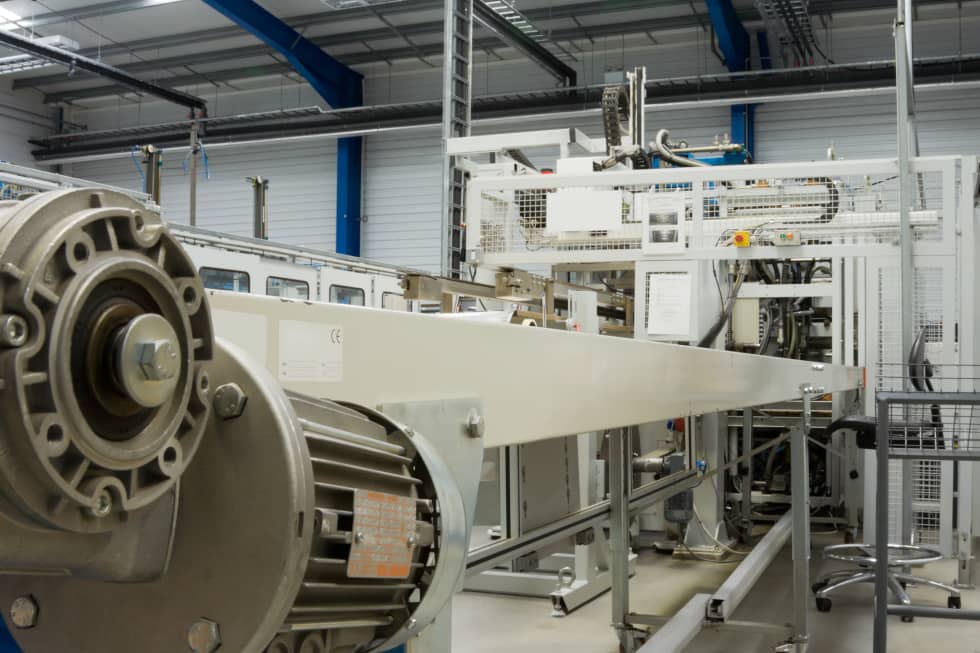 The FSSC 22000 Certification Scheme Version 5.1 for Food Packaging Manufacturers is based on ISO 22000:2018 Food safety management systems – Requirements for any organization in the food chain, Technical Specification ISO/TS 22002-4:2013 Prerequisite programmes on food safety — Part 4: Food packaging manufacturing and the FSSC 22000 Certification Scheme Version 5.1 Requirements for Organizations to be Audited.

Requirements for any organization in the food chain

ISO 22000:2018 was developed within the ISO high level structure (HLS) to improve alignment between ISO management system standards. This similarity makes integrating the Quality requirements of ISO 9001 into an ISO 22000 Complaint Food Safety Management System far easier, and vice versa. Key Elements of ISO 22000:2018 (Sections 4 to 10) requirements for a Food Safety Management System by section are:

In addition, this ISO/TS 22002-4:2013 adds other aspects which are considered relevant to food packaging manufacturing operations including:

To meet the needs of the key stakeholders and to ensure an adequate control of food safety, specific additional FSSC requirements for the food safety management system are included in the Scheme. These may be elaborations of the clauses in ISO 22000 and technical specifications for sector PRPs or additional requirements.

The FSSC 22000 Scheme Additional Requirements are:

A product design and development procedure for new products and changes